My father was in the Air Force and was stationed in Germany. He met my Mother and they got married in Germany.

I grew up visiting my Grandparents in Germany.

The summer before dental school started, I backpacked across Europe and Germany for several weeks.

I had the amazing opportunity to visit Germany with my family over the holidays. My office was going through another remodel so I had more time off this Holiday then I usually do.

The kids and I flew into Berlin and were picked up by Enrico. We drove back to his village. The village Wust has a population of 500. It was great to be back in Wust, where I had spent 5 weeks studying German. 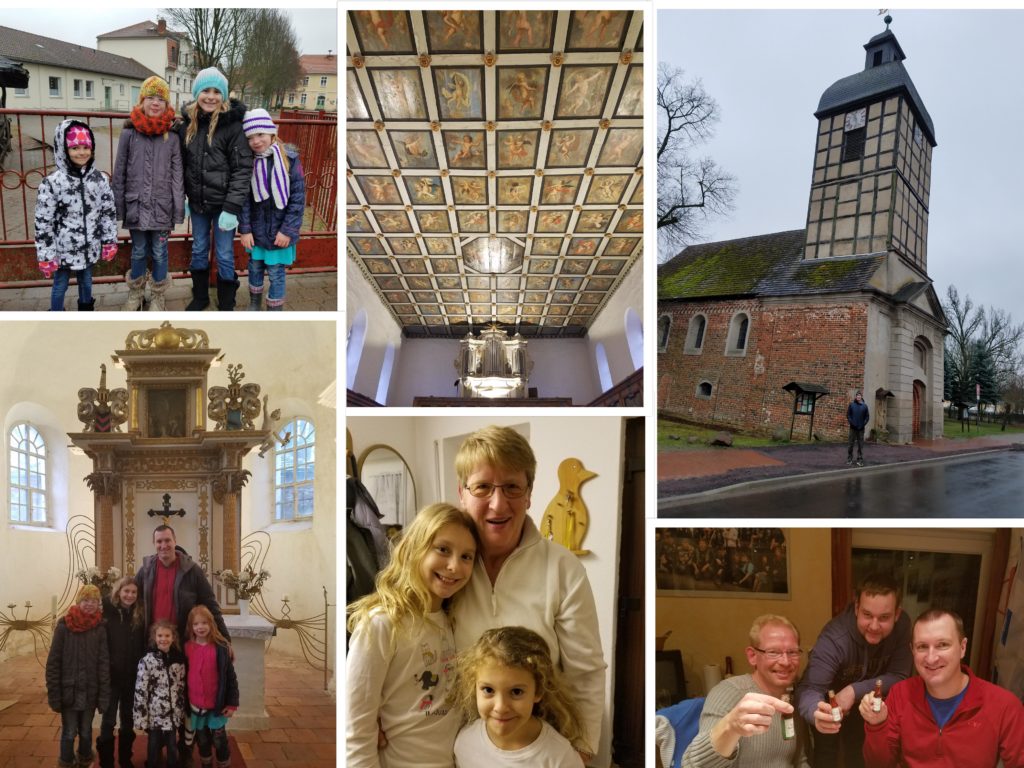 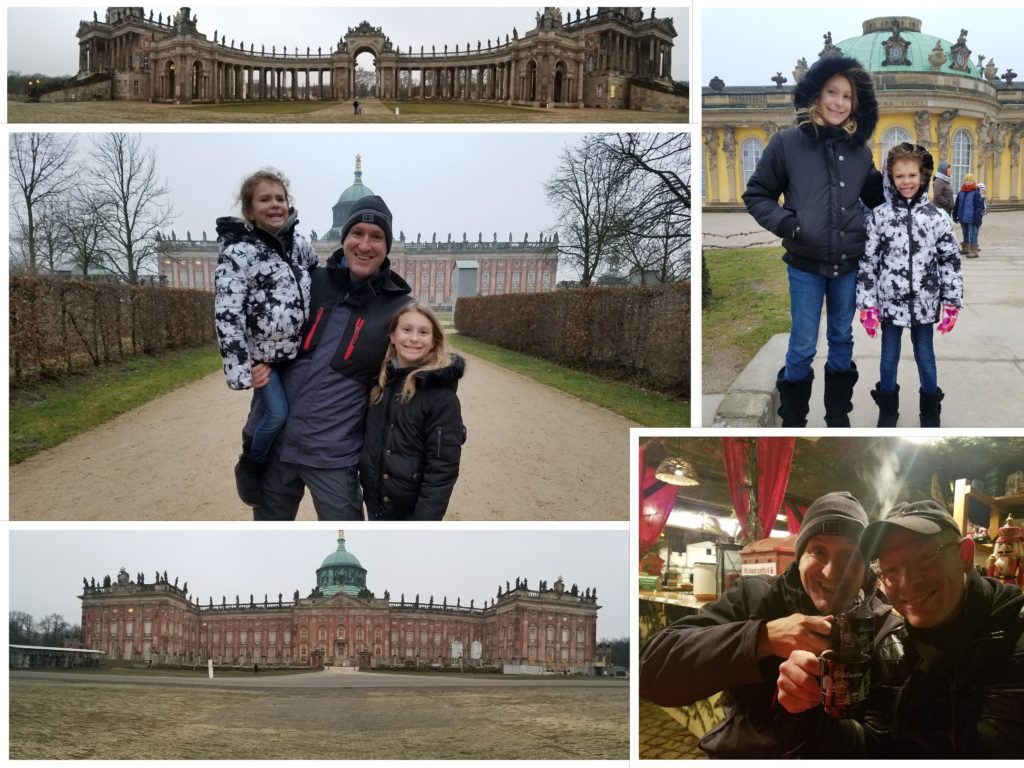 Beth joined us in Berlin and the Nugent family vacation was in full swing. 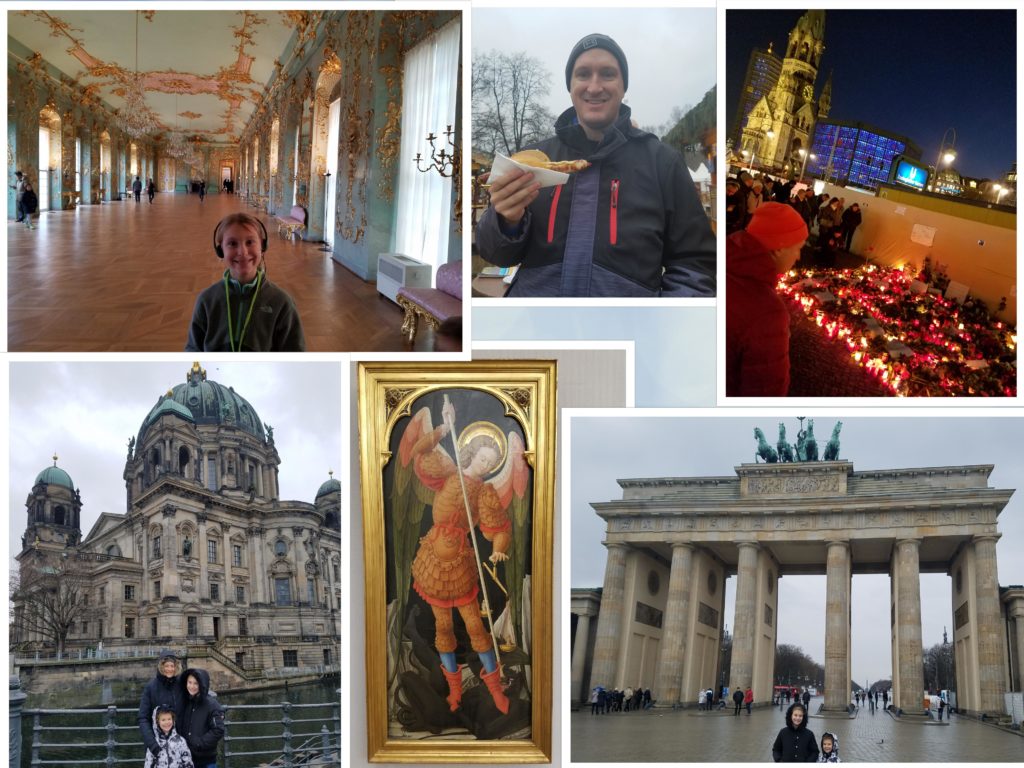 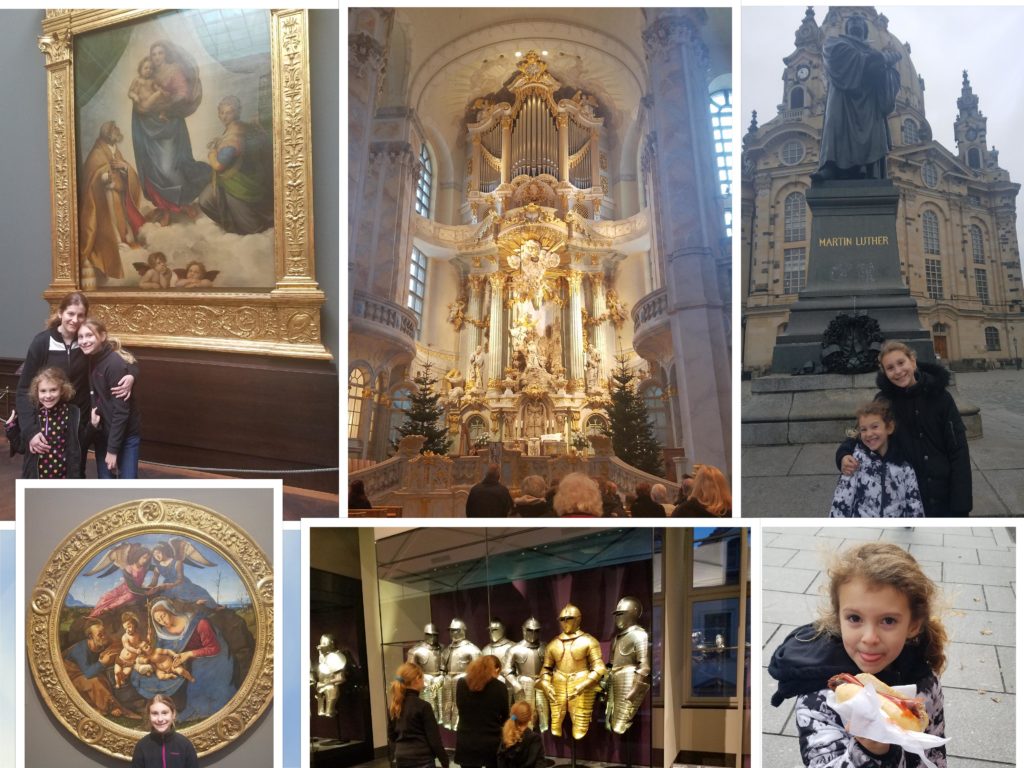 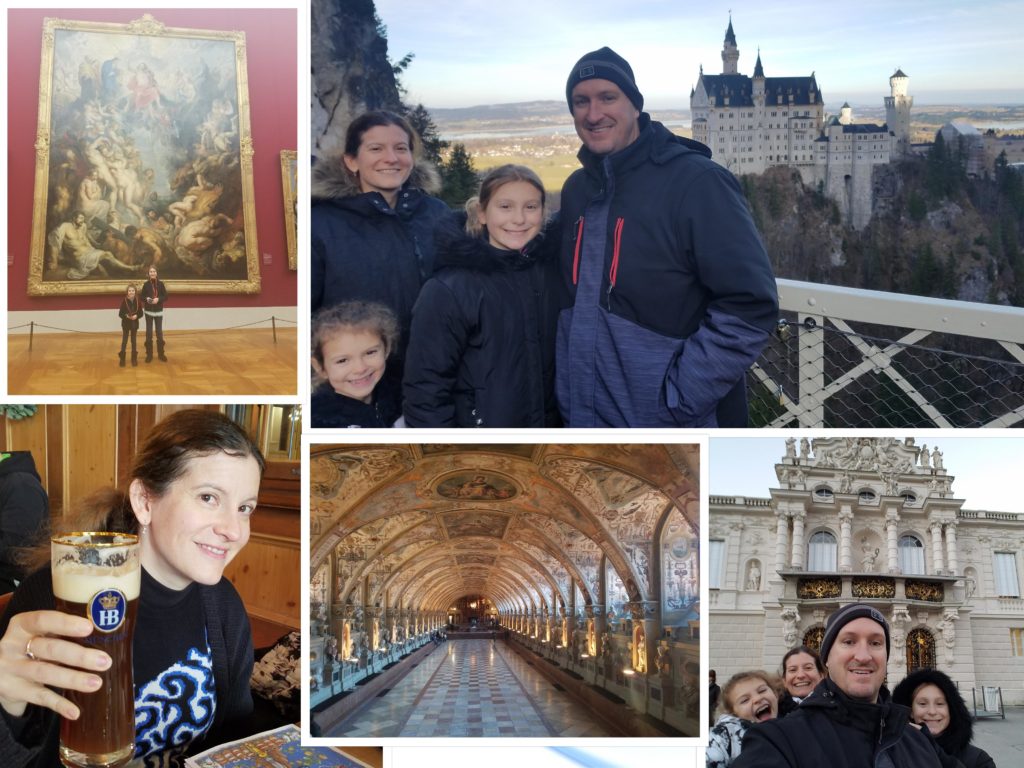 Worked on getting over jet lag and hung out with the Reumanns. The Church in Wust is over 800 years old. The ceiling of the church is painted with individual angles that are all different. Nobody knows who the artist was. We also visited the small cities of Jerichow and Tangermünde.  In Tangermünde we ate lunch in an old school house that was 240 years old and I had “Cow’s Tail” beer. This beer is only brewed in Tangermünde.

We drove over to Potsdam to visit the Sanssouci Palace and Neues Palais. Sanssouci Palace was the carefree summer home of Frederick the Great and was built from 1745-1747.  The Neues Palais is a gigantic showpiece palace that has over 200 rooms. It was built to host guests and dazzle visiting dignitaries. After the palaces went into the city of Potsdam and went to a Christmas Market. Then Enrico drove the girls and I to our hotel in Berlin. In Berlin, we went to the Natural History Museum and were going to go to the Zoo afterwards. However, Katherine was tired so we ended up seeing the new Star Wars film in German.

The next day Beth joined us. We visited the Pergamon Museum. It is a world class museum showcasing classical antiquities. It has the fantastic and gigantic Pergamon Altar, Babylonian Ishtar gate, Mesopotamian, and Roman treasures. Beth was tired from her trip so I took her and the girls back to the Hotel. I jumped on a bus and went to the Gemaldegalerie. It hosts Germany’s top collection of 13th through 18th century European paintings. It boasts over 1,400 canvases.  Some of the notable artists include: Albrecht Dürer, Jan van Eyck, Peter Paul Rubens, Anthony van Dyck, Rembrandt, Botticelli, Raphael and Caravaggio.

The next day we visited Charlottenburg Palace. It is the largest former residence of the royal Hohenzollern family. It contains the grandest collection of 17th century French fresco paintings outside of France.  It also has one of five original paintings of Napoleon Crossing the Alps by Jacques-Louis David. Across the street, we visited Museum Berggruen with works by Picasso, Henri Matisse, Paul Klee and Alberto Giacometti. Then to Scharf-Gerstenberg Collection of over 250 works of Surrealists. Artists included Salvador Dali , Paul Klee, Franciso de Goya.

Get up early and made our way to Berlin’s main train station. Early train to Dresden so we could visit a museum that is open on Christmas day. We arrived in Dresden, drop off our bags at the Hotel and are off to the Old Masters Gallery.

Our second day in Dresden, I take the kids to explore the Old City and visit some Churches. We pick up Beth after lunch and visit the Residenzschloss (Royal Palace). This was the residence of the Saxon prince electors and kings. It was destroyed in World War II and  is still being rebuilt. We visited the Saxon treasuries, the Green Vault. The Green Vault houses glittering Baroque treasures and was started by Augustus the Strong in the early 1700s. It evolved into the royal family’s extravagant trove of ivory, silver, gold and jewelry. We also saw the Royal Armory exhibit and the Turkish chamber (one of the oldest collections of Otoman art outside of Turkey)

Train to Munich and off to the The Glyptothek in Munich. Glyptothek  is Munich’s oldest public museum; the only museum in the world that is solely dedicated to ancient sculpture. Most of the Greek and Roman marble oeuvres in the museum were acquired by Ludwig I, who on a journey through Italy in the years 1804/05 had been enthralled by ancient art.

A short walk lead us to the Alte Pinakothek. It is one of the oldest and most important galleries in the world. More than 800 masterpieces by European artists bring to life the development of art from the Middle Ages to the end of the Rococo period. Venetian art is represented by its master painter Titian, as is Dutch baroque art by Frans Hals. Rubens occupies (with one of the largest collections of his works in the world) the center of the museum. A further highlight is the Old German art by Altdorfer and Dürer. Both Dürer’s epochal self-portrait from 1500 as well as his Four Apostles can be admired in the Alte Pinakothek.

Neuschwanstein is a nineteenth-century Romanesque Revival palace on a rugged hill above the village of Hohenschwangau near Füssen in southwest Bavaria, Germany. The palace was commissioned by Ludwig II of Bavaria as a retreat and as a homage to Richard Wagner. Ludwig paid for the palace out of his personal fortune and by means of extensive borrowing, rather than Bavarian public funds.

Neuschwanstein is one of the most popular of all the palaces and castles in Europe. Every year 1.4 million people visit “the castle of the fairy-tale king”. In the summer around 6,000 visitors a day stream through rooms that were intended for a single inhabitant. Neuschwanstein was the inspiration for Disneyland’s Sleeping Beauty Castle.

The Castle Linderhof was completed from 1870 to 1880 from designs by Carl von Effner. Surrounding the palace are imitation baroque gardens and terraces and cascades in the Italian Renaissance style. The adjoining landscape garden continues into the mountain forest of the Ammergau Mountains.

Ludwig II introduced architectural features into the park based on the world of the Orient, such as the Moorish Kiosk and the Moroccan House, and on scenes from Wagner’s music dramas such as the Venus Grotto, Hunding’s Hut and the Hermitage of Gurnemanz.

The linden tree, from which the palace takes its name, is now 300 years old.

Our third day in Munich involved visiting some churches and eating in the world famous Hofbräuhaus. The Hofbräuhaus is a brewery in Munich, Germany, owned by the Bavarian state government. The Hof (court) comes from the brewery’s history as a royal brewery in the Kingdom of Bavaria. Then off to the Munich Residence. It served as the seat of government and residence of the Bavarian dukes, electors and kings from 1508 to 1918. What began in 1385 as a castle in the north-eastern corner of the city (the Neuveste, or new citadel), was transformed by the rulers over the centuries into a magnificent palace, its buildings and gardens extending further and further into the town.

The rooms and art collections spanning a period that begins with the Renaissance, and extends via the early Baroque and Rococo epochs to Neoclassicism, bear witness to the discriminating taste and the political ambition of the Wittelsbach dynasty.

Last day involved traveling to the Marriot in the Munich airport, then coming back into the city.

The Staatliches Museum Ägyptischer Kunst (State Museum of Egyptian Art) is an archaeological museum in Munich. It contains the Bavarian state collection of Ancient Egypt art, and displays exhibits from both the predynastic and dynastic periods. The associated small Middle East section displays objects from the areas of Assyrian and Babylonian culture. For decades, the Egyptian museum was located in the Munich Residenz, but it was moved to the Kunstareal in June 2013.

Next, we visited the Neue Pinakothek (New Pinakothek).  Its focus is European Art of the 18th and 19th century and is one of the most important museums of art of the nineteenth century in the world. You can view romantic paintings to world-class Impressionists paintings. The museum also has one of Van Gogh’s Sunflowers.